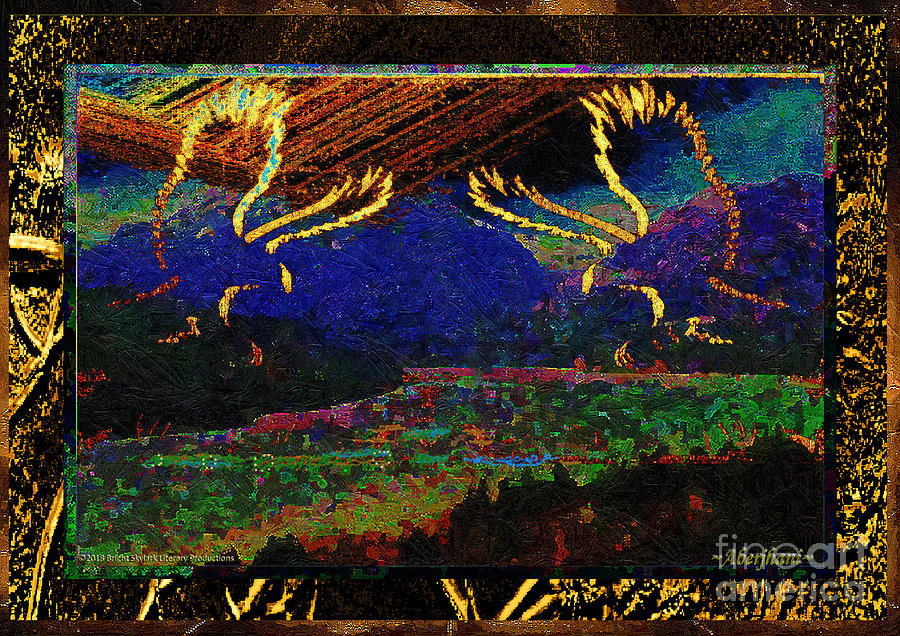 Lovers Dancing in the Golden Light of Dawn

Lovers Dancing in the Golden Light of Dawn

Lovers Dancing in the Golden Light of Dawn is one of those pieces I had to force myself to stop working on after years of experimenting with different ideas for it. A number of artists have told me about similar struggles deciding when to quit or whether to "give up" a certain work for sale.

I got started on Lovers Dancing in the Golden Light of Dawn back in April 2016. A lot of U.S. citizens at the time were concerned about unification as an extremely divisive presidential campaign got underway. Thus even though the two figures seen here are confronting each other, they are also celebrating the democratic process of a peaceful transference of power from one political administration to another.

The style chosen for this image was inspired by the painted linocut art of Luther E. Vann published in ELELENTAL, The Power of Illuminated Love, a book he and I created together and published with the assistance of the Telfair Museum of Art. The woodcut images in the book are "The Budoir" (p. 25), "Washington Park/A Night Out" (p. 48), and "Star People" (p. 71). However, with Lovers Dancing in the Golden Light of Dawn I mixed that particular technique with a layered oil pigment effect.

Early experiments using photographed eagles as models resulted in a single silhouetted figure that was featured in my poster titled How to Hear Each Other. At the same time that I doubled the figures to underscore the significance of balanced relationships, I decreased their physical density. This was done to emphasize the feelings of emotional or spiritual connectedness some people say they experience when committed to consciously practicing love and compassion as an antidote to the damage caused by hate groups.
The final sections of the sound waves in the upper left quadrant, the waves of metallic teal light in the right, and the entire bottom section of the sparkling green river and shadowed banks took months to design and apply. The creation of the gold frame is a developing story in itself and is another one of my attempts to employ frames which supplement the narrative of the portrait or landscape.

Excellent composition and rendering, Aberjhani!! A really romantic and inspiring piece with a marvelous title. L/F

Hello, belatedly, my Friend....so wonderful to finally catch up, and, thank you for all your visits to me...... I do love your Lovers Dancing in the Golden Light of Dawn, because it is such a celebration....of your finally allowing the consummation here as we see it, and, I've enjoyed the back story too, very much. Kudos to you, for persisting here, and the outcome of all your input is sensational.....a work of Art that reaches deep in my psyche......loving all the processes you used and explained.....persistent indeed. f.v........VIVA

Thank you very much for that Geraldine.

Stunning piece here. I love the colors and design. Amazing

Appreciate you checking out my artwork Arthur. Enjoying exploring your collection of works as well.

Thank you for the encouraging comments Wes and Bahar. And thank you to the Beauty in Art Group for featuring this image.

All your artworks are amazing beautiful