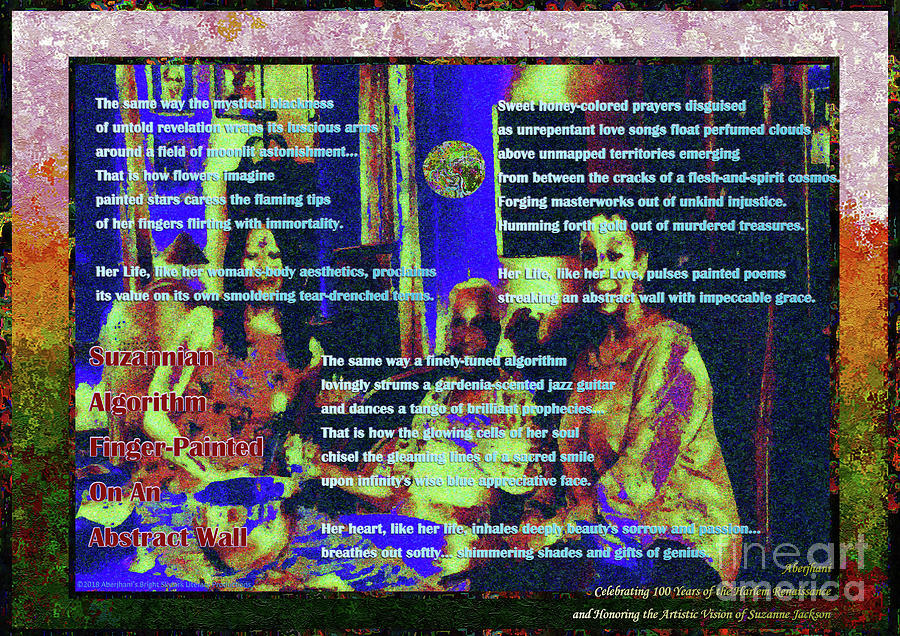 As stated on my signature line, this artwork was created and is presented in celebration of the 100th anniversary of the Harlem Renaissance and the brilliant artistry of Suzanne Jackson. It is one of two different images featuring the same poem. A significant percentage of sales from prints, t-shirts, cups, and other products featuring the artwork will go toward supporting the Five-Decades Retrospective exhibition of Ms. Jackson's art scheduled to be held at the Telfair Museum Jepson Center for the Arts in Savannah, Georgia (USA) in 2019 from June 28 until October 6. Below is an excerpt from the poem written specifically for this poster and occasion; it is followed by more information on Suzanne Jackson:

"Sweet honey-colored prayers disguised
as unrepentant love songs float perfumed clouds
above unmapped territories emerging
from between the cracks of a flesh-and-spirit cosmos.
Forging masterworks out of unkind injustice.
Humming forth gold out of murdered treasures.

"Her Life, like her Love, pulses painted poems
streaking an abstract wall with impeccable grace."
--Aberjhani (2018 from poem Suzannian Algorithm Finger-Painted on an Abstract
Wall)

Ms. Jackson is the recipient of a B.A. in Art from San Francisco State University and holds an MFA from the Yale University School of Drama, Design. She has enjoyed a highly-productive career both as an artist whose works bridge the gap between the Harlem Renaissance and our contemporary era, and as an educator.

She was only 24 years old in 1968 when she took the incredible step of opening Gallery 32 in Los Angeles, California. That move made her only the second gallery owner of African descent in the City of Angeles, a.k.a. "the City of Stars." It allowed her to advance not just her own career as an artist, but that of other women as well. Particularly notable was the gallery's "Sapphire" review of African-American women artists held in 1970. Ms. Jackson's own works since then have been shown in exhibitions across the globe.

In addition, her career as an educator has been a distinguished one, including stints as a Professor of Painting at the Savannah College of Art and Design (SCAD) from 1996-2009, and as Adjunct Professor of Painting, Graduate Studies, at the same institution from 2009-2013.

Prof. Jackson has said of her work: "By continued searching to find 'spirit' references especially in Indigenous-American cultural traditions, established and evidenced in the entry origins of African-American cultural experiences, I am following the paths of ancestors." That search and path includes the groundbreaking labors of the artists of the Harlem Renaissance; hence, the appropriately combined commemoration of Jackson's extraordinary accomplishments with the 100th anniversary of the Harlem Renaissance.

Much gratitude to the groups CONTEMPORARY and SOCIAL JUSTICE AWARENESS & UNITY for featuring this artwork, "Suzannian Algorithm Finger-Painted on an Abstract Wall" on the groups' front pages. Looking forward to spending time with the work of group members very soon.

Aberjani, here I repeat my kudos, as per my post to this series.....:Aberjhani.........there is so much to take in here.....I love your artwork dedicated to Ms. Suzanne Jackson, I am so impressed with all you've explained in your Description, and with this, your homage. Kudos, Congrats on the 100th Anniversary of the Harlem Renaissance,too. ......fv.......VIVA

Much gratitude VIVA Anderson. Hopefully I can partner with various organizations and up the ante a bit for observations of Suzanne Jackson's forthcoming 5-Decades retrospective & the Harlem Renaissance Centennial. With the overload of negativity in the world I'm all for celebrating gifts of inspired creativity.

Thank you Arthur. This piece gave me the opportunity to combine my visual art with my poetry so I enjoyed working on it quite a bit.

I appreciate that Geraldine. Paying tribute to an artist as accomplished as Suzanne was a challenge but also fun.