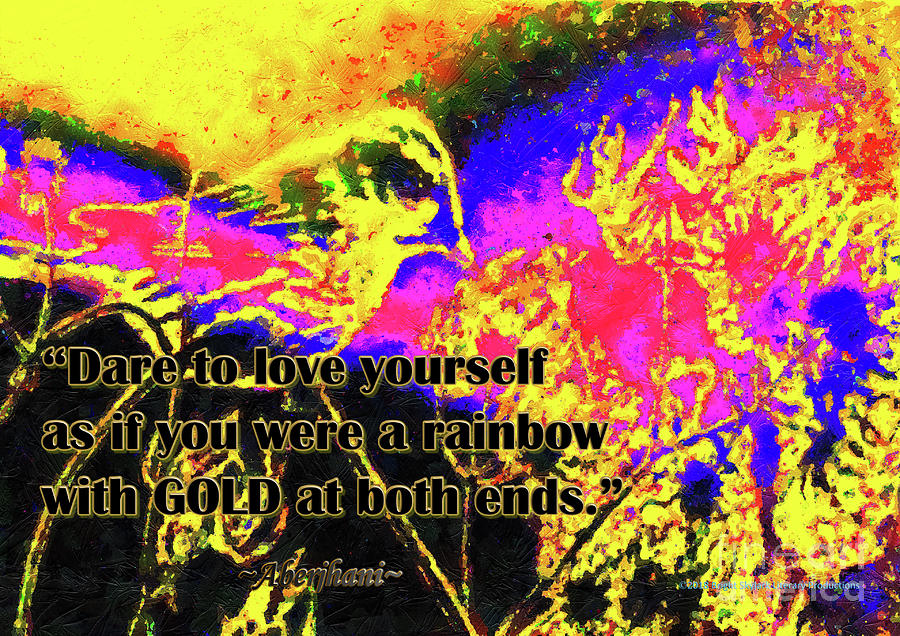 Providers of some friendly feedback regarding the first two posters in my Official Dare to Love Yourself Series suggested that, for their specific tastes, the images were "pretty but kind'a tame." I heard them well enough and for this third edition in the series kept the basic visual formula while upping the ante on the color-impact factor. The rationale behind critiques seemed to center around the idea that love in all its forms should exhibit energetic sustainability. (Honestly not sure what was meant by that but giving it my best shot.)

I have posted about the origins of this quote here at Fine Art America, on my Bright Skylark Literary Productions website, and on different social media. It has been famously tweeted by folks like David Bowie's widow Iman, and actor and rapper LL Cool J. For those who missed previous posts, here is a little background info taken from my book, Journey through the Power of the Rainbow:

"It came from the poem 'Angel of Healing: for the Living, the Dying, and the Praying.' A kind of rainbow-striped light bulb went off in my head as I noted the poem was part of the original Songs of the Angelic Gaze series written in 2006 during what I have come to call the summer of the angels...That particular haiku stanza [Dare to love yourself/ as if you were a rainbow/ with gold at both ends.], I had hoped, would speak some faith into the hearts of the 33,300 young, old, and in-between cross-cultural individuals in the United States alone on their way to committing suicide; and to the 20 million, according to the World Health Organization, throughout the Global Village who attempted suicide every year.

"Whether naive on my part or not, it seemed worth taking the time to try to convince others that their lives possessed beauty and meaning worth preserving and honoring. I had hoped too that these lines might help persuade those silently combusting inside suppressed rage and muted disappointments to express their painful frustration in ways other than mass murder. If they could recognize and celebrate value within themselves, then perhaps they could allow the same in regard to those upon whom they projected their own self-loathing and sense of worthlessness." (from Journey through the Power of the Rainbow)

I love the message and beautiful artwork Aberjhani ! l/f

Aberjhani, the vibrance of your chosen colors combined with message create unique and impactful pieces. Would love to see you create a piece showing a rainbow with a pot of gold at each end. What a powerful image! -L/F/Following.

Vincent-- Too many other folks borrowed my haiku & jumped on the idea of the rainbow with a pot of gold at each end before I could. But that's okay. Uniqueness is a good thing :)

Thank Carol for the kind words.

Glad you enjoyed this Maria. I've been surprised by the growing number of people who express appreciation for the concept.

Thank you Wes. I found the feedback from the folks who suggested it very helpful.

Thank you VIVA Anderson. I have been surprised by number of people around the world who have adopted these words and shared them in one form or another.