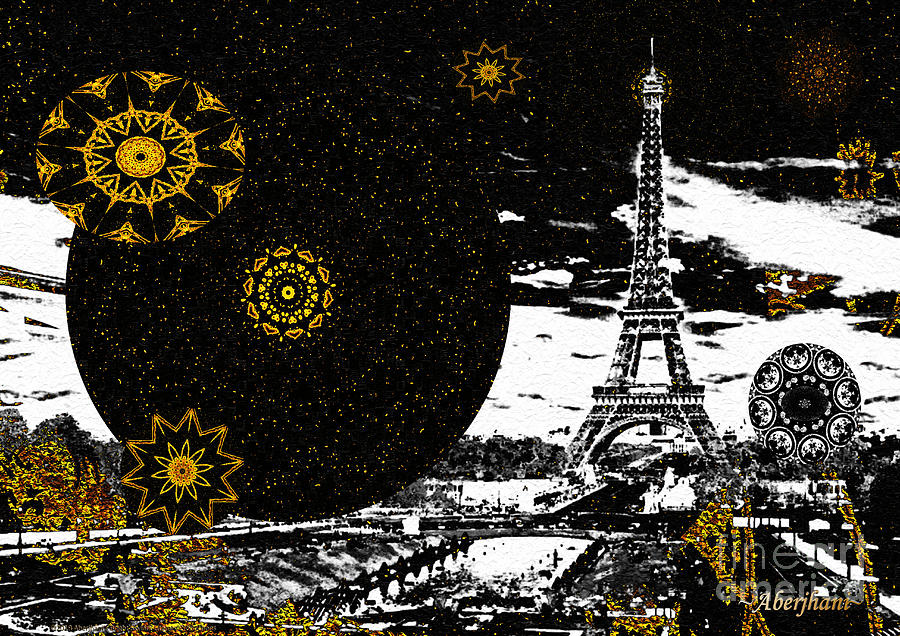 The Eiffel Tower in the city of Paris, France, is one of the most instantly-recognizable landmarks in the world. In this image, "City of Lights - Kaleidoscope Moon for Children Gone Too Soon Number 6" it is placed in a multidimensional setting where a black and white Paris urbanscape converges with a cosmic background of gold and black kaleidoscope moons and stars.

The gold and black elements celebrate the many cultural gifts Paris has bestowed upon humanity throughout history. Those gifts in the forms of cultural arts, philosophical concepts, legal principles and more are the reasons for which it is known as The City of Lights. The black and white urbanscape is an acknowledgement of the different social justice and political upheavals France is dealing with at present.

Paris was one of the most influential international outposts for the Jazz Age Harlem Renaissance centered in Harlem, New York. As such, my Encyclopedia of the Harlem Renaissance (2003) includes a long article (by co-author Sandra L. West) on the historical mutually-beneficial relationship between France and African Americans.

In 2015, I paid further homage to that relationship with an essay titled "For Love of Paris and a More Compassionate World," following terror attacks on the city on November 13. Three days later, a Frenchman named Antoine Leiris who lost his wife in the attacks and was left to raise their young son alone, published a letter to those responsible. In it, he stated, "Friday night you stole the life of an exceptional being, the love of my life, the mother of my son but you will not have my hatred... Of course I am devastated by grief, I grant you this little victory, but it will be short-lived..." Another father explained to his young son that flowers were more powerful than guns and bullets because they united people in love and unity rather than divide them through fear, hate, and violence.

More recently, the people of France (especially youth, like those of Great Britain) have taken issue with such factors as high gas prices, disproportionate taxation, and other economic matters which kicked off a series of "Yellow Vest" protests last November. By the end of 2018, 10 people had reportedly been killed during the demonstrations. They have continued but thus far remained relatively peaceful in 2019.

Thank you for the visit and the kind words Bonnie. Appreciate it very much.

Thank you Swedish Attitude Design. I appreciate you checking out City of Lights - Kaleidoscope Moon for Children Gone Too Soon Number 6.

Very creative vision of Paris and its culture...

~ A Brilliant and very well Executed work! I love your art and your gallery! ~ Sincerely Cia ~

Appreciate you checking it out Ramon. I find your work very intriguing & am enjoying exploring your galleries.

Very glad you liked it Debra.

Thank you for checking it out Marie.

Much gratitude to the CONTEMPORARY and ARTS FANTASTIC WORLD groups for featuring City Of Lights - Kaleidoscope Moon For Children Gone Too Soon Number 6.

I appreciate your appreciation Ben! I'm enjoying checking your splendid gallery as well.

Amazing piece, Aberjhani!! The sense of depth and the composition of the whole scene is magnificent. L/F

Appreciate that very much Angeles. Achieving that "sense of depth" took some work but it turned out to be worth it.

Thank you for checking it out Jeff.

This is so beautiful a testimonial to Paris,and dedication for your Children Gone Too Soon, Aberjhani.....I love all the elements, as sophisticated, and beautiful as Paris itself. Kudos.......fv........VIVA