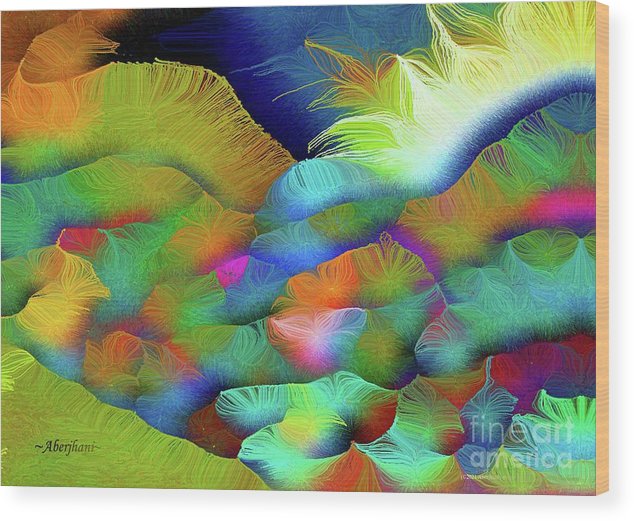 Taking a Deep Breath between Rivers and Borders Wood Print

Taking a Deep Breath between Rivers and Borders by Aberjhani - 12" x 8.5"

Taking a Deep Breath between Rivers and Borders wood print by Aberjhani.   Bring your artwork to life with the texture and added depth of a wood print. Your image gets printed directly onto a sheet of 3/4" thick maple wood. There are D-clips on the back of the print for mounting it to your wall using mounting hooks and nails (included).

“Taking a Deep Breath between Rivers and Borders” is a visual interpretation of the stories of millions of people around the world who are... more

Thank you very much for that Aziza. Appreciate it very much.

Thank you for those very thoughtful comments VIVA. Much of what you've shared is directly relevant to my existence as well. Always grateful to visit your collections & spend time wandering the wonders of your exceptional work.

My Friend, I so 'know' your premise here. It touched me visually so much, and , my heart took heart, but, went on a different tack, ........very personal, to do with living, changing, adapting, as they relate to ageing, me, personally. Yet, I found the same response for my thoughts to heal the quandry that 'changing' causes. This, then, also~, speaks to me of finding a future, when 'the time comes' to 'move on', yet take your 'person' your memories along. And I feel beautifully reassure by this art, for my own personal 'journey'. Thanks always, for your introspection, care, hope! from my heart, :))))))) VIVA

Galore colors with that interpretation. Awesome. Great style too. F

Thank you very much Sunil.

I appreciate those kind inspiring words Susan. Thank you.

“Taking a Deep Breath between Rivers and Borders” is a visual interpretation of the stories of millions of people around the world who are departing the countries of their births in search of better lives elsewhere. These journeys, depending on how they are undertaken, can be filled as much with joy and hope as they can with terror and trauma. Recent news reports on Haitians attempting to immigrate to the U.S., plus Latinxs in holding camps on the U.S./Mexican border illustrate some of the difficulties of making such a move. In addition, people attempting migration from Eastern Europe and elsewhere have found themselves victims of human trafficking (modern-day slavery). The more positive side of human migrations is that historically, and presently, many people who have relocated to different countries have made numerous positive contributions within their adopted homelands. In the case of the U.S., that became particularly obvious during the height of the COVID-19 pandemic when ide...