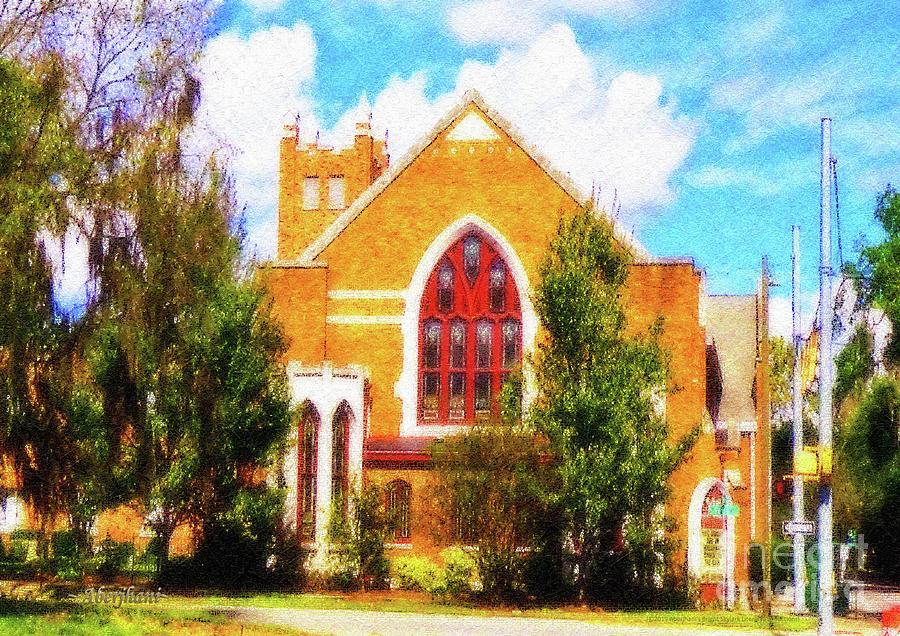 Completing "Sunny Asbury Day" became possible only after an abandoned building which stood south of it across the street was torn down in 2018. That event allowed me to set up at a distance and incorporate the church more fully into its evolving surrounding environment. The green trees, bright blue sky, and passing white clouds framed the church in a way that was less noticeable prior to the removal of the abandoned building. Since plans are in place for a new building adjacent to Asbury, a wide view like this one may not be possible in the future.
GENERAL INFO:
Asbury Memorial United Methodist Church, located on the east side of Savannah, Georgia (USA), is a very unique structure and community. As I hope my series of digital paintings and photography depicting it will show, when viewed from different angles the building can look like a traditional church, a school, or a medieval castle.
The cornerstone of the church was built in 1921 (according to its website) and literally sits on a corner intersection of two streets, Henry and Waters Avenue. An impressive education annex was added several decades later. Its unique appearance fits the church's approach to Christianity, which some find controversial. Their logo is a clown, viewed as symbolic of the notion of "Holy Fools" who risk social criticism for their devoutness but which is also an emblem of spiritual joy celebrating the teachings of Christ.
In addition, they stress the importance of creativity as a fundamental aspect of spirituality. Members honor a tradition of "clown-making" established a long time ago by a group of women who used to meet to make clown dolls which were sold to help pay church expenses during economically-challenging times. In addition, the church presents every year a very popular "God on Broadway" production which utilizes theatrical techniques and themes to illustrate a powerful sermon. Like I said: unique. Put all these together and the church's motto becomes: "Where the Joy of God is Expressed Creatively!"
In a very progressive approach for the American South, the church stresses that all people are "included at Asbury regardless of age, race, socio-economic status, sexual orientation, gender identity, gender, ethnicity, religion, ability or background. Change and growth are primary at Asbury—growing in one's personal life, relationships, and in relationship with God.”

Thank you very much Carol for checking out Sunny Asbury Day. Glad you got a chance to check it out.

Thank you Stephen, Danny, & Lois. Architecture like this gives you a lot to work with so I tried to make the best of it.

Appreciate your kind comments very much Donna and Angeles.

Thank you very much Donna & Cia. I appreciate your comments.

WoW... THAT is true Art!! So Marvelously Beautiful piece and Very Excellent Executed as well. I So Love your work style and ofc your lovely Gallery.. ~ Sincerely Cia ~

Thank you Geraldine. I appreciate that.