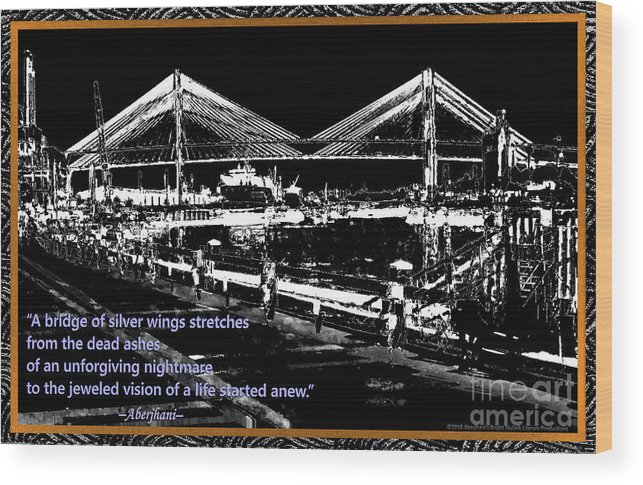 Renaming the Eugene Talmadge Memorial Bridge wood print by Aberjhani.   Bring your artwork to life with the texture and added depth of a wood print. Your image gets printed directly onto a sheet of 3/4" thick maple wood. There are D-clips on the back of the print for mounting it to your wall using mounting hooks and nails (included).

This image of the Savannah River Bridge, officially named the Eugene Talmadge Memorial Bridge, is my commemoration of the first anniversary of the... more

Thank you very much VIVA. I appreciate it. This is one of the images I plan to make available for an autographing event at the end of March.

I love your quote, HERE !, Aberjhani!, And compliments on this wonder-ful! abstract!, FAV, regards, VIVA

Thanks for that Jeff. Appreciate it.

You have a beautiful way with words, this message and artwork is excellent ! l/f

Much gratitude for the comment Geraldine. This is probably one of my challenging pieces.

I'm aware that a lot of social media enthusiasts are accustomed to seeing the quote I've employed with Renaming the Eugene Talmadge Memorial Bridge paired with images celebrating a new year but I promise that the way I have used it here is appropriate :)

This image of the Savannah River Bridge, officially named the Eugene Talmadge Memorial Bridge, is my commemoration of the first anniversary of the historic symposium held September 5, 2017, at the Savannah Theatre in Savannah, Georgia. The event marked the first time residents of the city were invited to an open forum in which they could discuss the need to change the name of the bridge (thus title for this image). Onstage panelists acknowledged that former Governor Talmadge's name should not remain on the structure as a memorial to him because of his well-known promotion of white supremacy throughout his political career. Given Savannah's age and racial demographics, along with administrators' plans to position the city for a progressive leap forward, most agree maintaining the current name makes little sense. The push to get it changed made national news, and state representatives did in fact introduce House Resolution 1054 to suggest another name (albeit one many consider only slig...