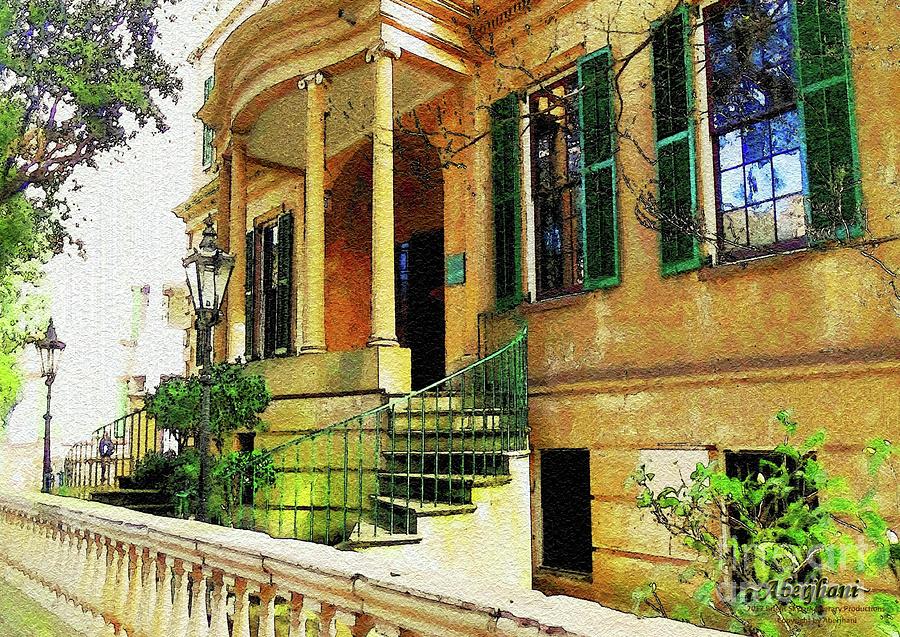 This is one of the first images I posted for sale on Fine Art America and it is now part of the front cover for the book Dreams of the Immortal City Savannah (ISBN 978-9388125956). The book is described as: "A memoir of what happens when the heart and soul of a historic city meet the art and purpose of a 21st-century advocate for compassion and social justice."
Built in 1817-1819, the Owens-Thomas House mansion is part of the Telfair Museums complex and a National Historic Landmark building. It is often described as one of the finest examples of Regency architecture in the United States and when designed and constructed, by architect William Jay, was considered extremely sophisticated.

It is prized today by historians and tourists as a prime example of an urban antebellum structure where slave quarters remain intact behind the main building.

At a time (the 2010s) when large numbers of Savannah's indigenous African-American population are falling prey to gentrification, the elegant mansion is also an important reminder of how far they have come since the American Civil War.

Thank you very much Marcia for checking out "Owens-Thomas House in Savannah, Georgia."

I appreciate that Eddie. Thank you.

Beautiful color and composition on this image Aberjhani! And congratulations on your book cover! Excellent work!

Thank you for the very kind & inspiring words Amy.

Wouw!! This is So incredible Amazing work of yours! Thank you so much for your recently comments and encouragement on my work, it means the world to me to have your support❣ ~ Sincerely Cia ~

Such a beautiful picture with great treatment!

Much gratitude to the Your Very Best Photography Group for featuring this work.

What a warm and gorgeous architectural piece, Aberjhani!! The rendering and the atmosphere are so gentle. L/F

Very glad you enjoyed it Angeles. I'm enjoying catching up on your latest posts.

I appreciate the comment Zenya. Wanted to do something a little different from other images I've seen the Owens-Thomas House mansion.

What a beautiful capture and composition of lines and geometries.

Thanks for that Bunny. Of course a lot of the credit has to go to the architect, William Jay, who designed this incredible building and therefore gave me a lot to work with.

Very glad you like it Carol. The house itself is a rarity so I tried to do it some justice.

Thanks Marcia. It's a true American classic.