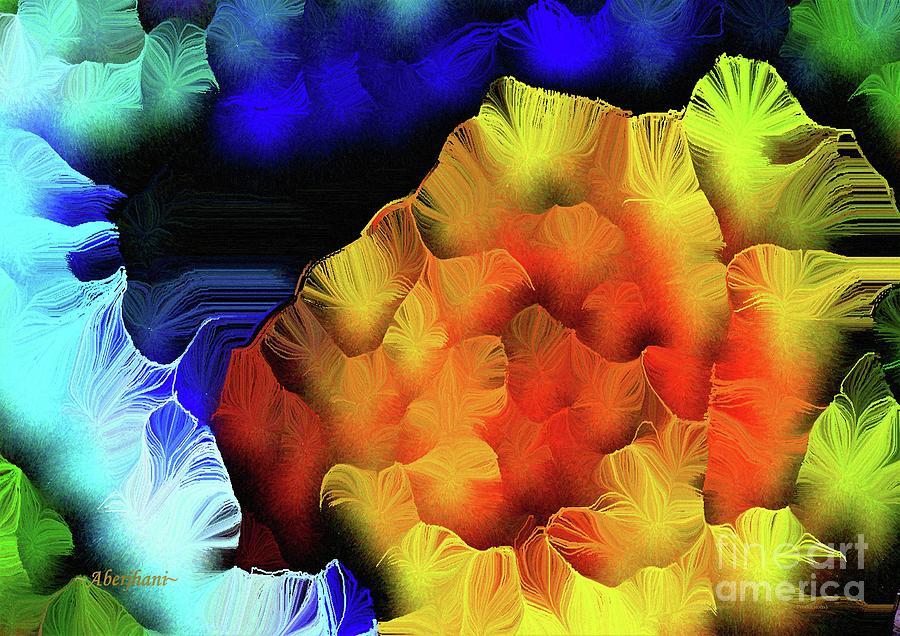 “I found I could say things with color and shapes that I couldn't say any other way - things I had no words for.” —Georgia O'Keeffe

“O’Keeffian Petals” is a Silk-Featherbrush Artstyle triptych presented in tribute to the artistic legacy of American artist Georgia O’Keeffe (1887–1986). Each of the prints are complete works which can be hung either together or separately. The triptych consists of the following prints:

Like the first 2 prints in the O’Keeffian Petals Triptych, “Blossoming Gold” explores the artist’s favorite motif, the intricacies of patterns and colors found in beautiful flowers. The giant gold rose seen here contains the kind of fluid lines and shaded hues found in various O’Keeffe but is surrounded by lines of barrier-like dividers. These represent the challenges O’Keeffe faced, and overcame, as a woman determined to create meaningful images from her own sense of aesthetic purpose and spiritual wonder.

NOTES ON O’KEEFFE: Georgia O’Keeffe is one of the most iconic artists in American art history. She is often credited with being the “Mother of Modernism,” a period of artistic advancements which got underway in the early 1900s and along with the Harlem Renaissance began reaching full expressiveness in the 1920s and 1930s. Married for a time to celebrated photographer Alfred Stieglitz, O’Keeffe also enjoyed a close friendship with Harlem Renaissance writer Jean Toomer.

O’Keeffe won both acclaim and notoriety for her detailed depictions of flowers focused on the fluidity of their shapes and strong appeal of their colors. They became a motif from which she repeatedly drew inspiration and produced masterpieces of visual art as well as aesthetic theories on the balance between abstract painting and figuration. Prior to gaining fame as an artist in New York City in the 1920s, she taught and lived in Texas. In 1929, she began traveling annually from New York to New Mexico, where she settled in 1949. The colorful landscape of the American southwest became something like a visual metaphor symbolizing her interpretation of aspects of the American character.

Your Okeeffian works remind me of Dale Chihuly's glass works. I like the colourful folds and layers.

This art creation is very beautiful and i love how it look like a glorious blossom Aberjhani!! such a delicate feeling, i enjoy the amazing fine details and the uplifting colours. fabulous work!! L/F

I appreciate that very much Carol as I do your portfolio of amazing work.

A stunning blend of shapes and colours Aberjhani! Gorgeous work!

Amazing flow, contrast of colors, and textures in this extraordinary artwork, Aberjhani!! I LOVE it!! L/F

Thank you Angeles. Trying every day to get a little better.

I see the baby child in the womb of Mother is gleaming to enlighten the world and Universe with the generosity! You are so nice my friend remain always soulful as I can actually see so much! Stay safe, healthy, happy, and blessed, always! :)

And you stay the same Tejsweena. Thank you for your always thoughtful & inspiring comments.

Another beautiful Art , inspired, is this Series! words....fail, beauty..speaks...f.v, VIVA