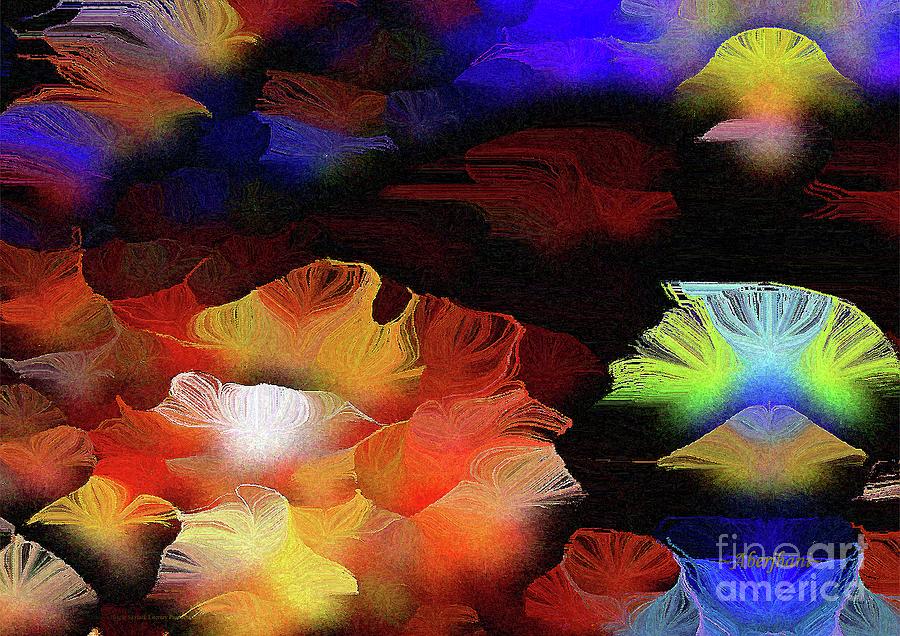 “When you take a flower in your hand and really look at it, it's your world for the moment. I want to give that world to someone else.” —Georgia O'Keeffe

This first Silk-Featherbrush Artstyle triptych is presented in tribute to the artistic legacy of American artist Georgia O’Keeffe (1887–1986). Each of the prints are complete works which can be hung either together or separately. The triptych consists of the following prints:

DESERT ROSE EPIPHANY:
The “Desert Rose Epiphany” print is the first in the O’Keeffian Petals triptych. It reflects a favorite aesthetic technique of the artist, which was to pair colorful blossoms with unexpected images like the skulls of dead animals. This Silk-Featherbrush Artstyle print contrasts a giant sun-colored rose with abstract images symbolic of discoveries made, or epiphanies experienced, by O’Keeffe, while exploring the colorful landscapes of the American Southwest. These discoveries included the physical environment as well as personal spiritual revelations. This artwork is available as prints, greeting cards, and duvet covers only.

NOTES ON O’KEEFFE: Georgia O’Keeffe is one of the most iconic artists in American art history. She is often credited with being the “Mother of Modernism,” a period of artistic advancements which got underway in the early 1900s and along with the Harlem Renaissance began reaching full expressiveness in the 1920s and 1930s. Married for a time to celebrated photographer Alfred Stieglitz, O’Keeffe also enjoyed a close friendship with Harlem Renaissance writer Jean Toomer.

O’Keeffe won both acclaim and notoriety for her detailed depictions of flowers focused on the fluidity of their shapes and strong appeal of their colors. They became a motif from which she repeatedly drew inspiration and employed to produce masterpieces of visual art as well as aesthetic theories on the balance between abstract painting and traditional figuration. Prior to gaining fame as an artist in New York City in the 1920s, she taught and lived in Texas. In 1929, she began traveling annually from New York to New Mexico, where she settled in 1949. The colorful landscape of the American southwest became something like a visual metaphor symbolizing her interpretation of aspects of the American character.

another great image in this series with a little more somber mood, Aberjhani

My Friend.. So wondrous your gift to us of this your beautiful, treasured flower and your ❤️heart. I thank you soo much, VIVA

The visuals and energy of this beautiful artwork is sensational and superb Aberjhani!! i feel something warm, uplifting and healing when i gaze at this work. those colours are fabulous!! L/F

I appreciate that very much Jerry. Thank you.

Thank you very much Angeles. I hope you had a great Christmas and are enjoying the holidays also.

Such an extraordinary artwork, Aberjhani!! The contrast between the light and shades is amazing. Merry Christmas to you and yours!! L/F

Thanks again Lee. Appreciate your support.

Thank you Carol. Very glad you liked it.