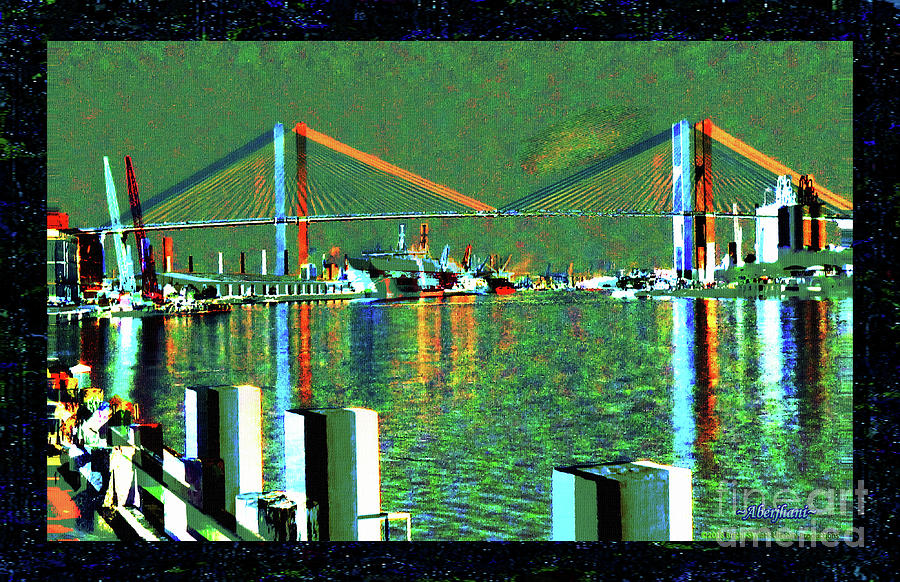 Of Time and the Savannah River Bridge

Of Time and the Savannah River Bridge

Literary sources have long influenced choices of titles for my visual art and this one will be obvious to some folks. It is an allusion to the American author Thomas Wolfe's classic novel, Of Time and the River. The adaptation makes a good fit for the subject of this image because of the history surrounding the Savannah River from its previous use as one of America's busiest locations for the importation of slaves, to its current-day growth into one of strategic importance to America as a whole.

The title is also appropriate because of the classic design of the bridge stretching from the city of Savannah's downtown area to Hutchinson Island across the river.

The composition of this work required fusing mixed media with original photography and several styles of painting, including impressionism, abstract, and cubism. The goal here was to create something which is not defined by or limited to the political controversy over the structure's current official name: The Eugene Talmadge Memorial Bridge. It is an inspiring aesthetic wonder in its own right and I hoped to pay some manner of tribute to the combinations of engineering, design, and labor that went into its creation during the latter part of the last century.

Thank you so much for checking it out Madame Memento. I'm considering attempting a second edition of this artwork but have to wait and see what kind of ideas come to me. Thanks again.

I love the vintage feel of this work, beautifully done 👍 l/f

Appreciate that very much Marcia. It took a while to get it right but I'm happy with the final results.

Such an amazing piece, Aberjhani!! Love the neat composition and the combination of crisp shapes and vibrant colors. L/F

Thank you very much Angeles. Appreciate it.

Thank you very much Alfonso. Glad you enjoyed it.

Outstanding, I love all the colors here. This really is a work of art

Sincere GRATITUDE to the Contemporary & Digital Art groups for featuring this work.

It took some work but finally got there. Thanks Jeff.

Something about the quest for social justice seems to inspire :) Thank you for the kind words.

I love the colors, textures and the creativity of this awesome artwork ! l/f

Thank you for that Geraldine. The bridge itself is quite a marvel of engineering so I was hoping to do it a bit creative justice.

The Savannah River Bridge Series is one of my most important in terms of creative aesthetics involved and social justice concerns, so I greatly appreciate your appreciation Jack.

Enjoy how this image is worked, pleasure to view;)

Thank you Lori. I'm learning a lot from the different members of Digital Art.

Congratulations on your feature in Digital Art