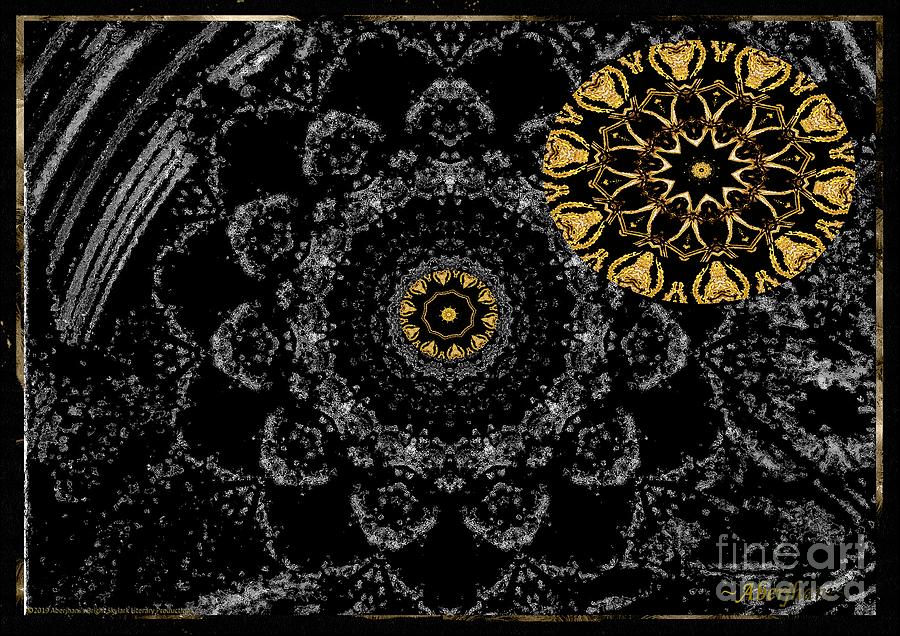 THE IMAGE ITSELF
If you check out "Kaleidoscope Moon for Children Gone Too Soon Number 1" you will notice the style for it is completely different from what is employed here. There's a reason for that: The phrase, "This is not a simple black and white issue," is a fairly common one in the English language. For those unfamiliar with it, it means something is not as obvious as it might appear to be. But interestingly enough, what we refer to as blackness or whiteness is often more a matter of complex gradations of colors, emotions, and meanings than we might assume. That complexity has been known to lead to confusions and destruction in political situations, but also to celebrated discoveries and resolutions in creative contexts.

Bearing in mind the above, "Kaleidoscope Moon for Children Gone Too Soon Number 2" features a geodesic orb of flaming gold lines set against solid ebony surface. The colors and patterns in this instance are intended to pay tribute to children who have become "ancestors" before living a full life. In the center of the image, simplified child-like faces form a circle around a large silver-white ring with gold shining in the center. The smiling faces themselves are surrounded by a floral-like pattern, the overall effect creating the image of a large blossoming flower with a silver rainbow in the upper-left quadrant. Other elements and interpretations I leave to viewers' imaginations.

THE STORY BEHIND THE SERIES
During the holiday season some years ago, I lost a niece and nephew to extreme violence and chose to honor their lives by naming a Christmas tree after them. It was my way of gifting them the joy of which they had been robbed. The new Kaleidoscope Moons Series is an extension of that tradition in honor of children lost to such violence around the world as we move forward into 2019. It is also an expression of standing in solidarity with families who have endured these losses as they adjust to something from which they are unlikely to ever fully recover. Therefore, in lieu of a Christmas tree, the Kaleidoscope Moons Series.

Obviously art cannot bring back any of our loved ones lost to senseless violence. But for those who did not get their chance to establish mega-stardom and document their passage on this journey we call life, the Kaleidoscope Moons Series can testify on their behalf. It can proclaim they were here and their lives were/are as deserving of celebration and remembrance as anyone's.

Amazing work in this soulful series. Love the depth and texture and the deep meaningful story behind the image.

This creation is a visual delight Aberjhani!! wonderful composition with amazing design. it looks very appealing as products!! L/F

This one is exceptionally beautiful. Love the intrinsic detail and darker colour scheme.

Such a powerful and mysterious piece, Aberjhani! Love the fine composition. L/F

I appreciate that very much Swedish Attitude Design. Always glad to spend time in your gallery enjoying your marvelous creations.

Much gratitude to the ARTS FANTASTIC WORLD Group for featuring this image and its message.

Thank you very much Aaron.

As is the extensive impressive body of your work Geraldine. Your comments are greatly appreciated.

Another fabulous piece Aberjhani, you have a great creative mind! l/f

I appreciate that very much Carol. I am often inspired by your exceptional work.

This is so special, Aberjhani......faces,flowers,all there as beautiful spirits of the universe now........f.v.....VIVA

Thank you so much VIVA. The spiritual aspect of this piece was particularly important.