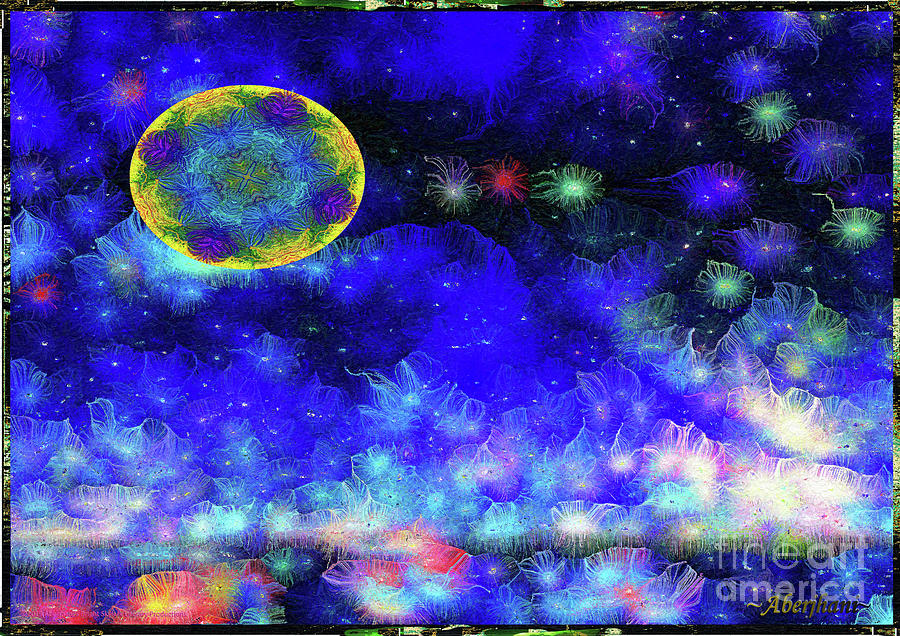 THE IMAGE ITSELF
The Silk-Featherbrush style was employed to introduce the Kaleidoscope Moons Series because its basic hues and line elements harmonize well with the conceptual intent. More precisely, the techniques of the style work for "Kaleidoscope Moon for Children Gone Too Soon Number 1" because it helps magnify the idea of innocent souls ascending as opposed to blameless children being horrendously needlessly murdered. Not every canvas in the Kaleidoscope Moons Series will follow this style but my hope with the first image is to convey a sense of transcendent beauty beyond the hatred and fear driving so many acts of violence in the world.

Obviously art cannot bring back any of our loved ones lost to senseless violence. But for those who did not get their chance to establish mega-stardom and document their passage on this journey we call life, the Kaleidoscope Moons Series can testify on their behalf. It can proclaim they were here and their lives were/are as deserving of celebration and remembrance as anyone's.

Hi Aberjhani, A wondeful image of another world that is full of colour and higher consiousness, Love it! L/F.

My thanks to ARTS FANTASTIC WORLD for featuring this work.

Thank you very much Gerald.

Very glad you like this Cia. I've enjoyed your recent offerings as well.

Colorful and inspiring, and a wonderful tribute as well, Aberjhani! L/F

Greatly appreciate your comments Wes as I do your exceptional gallery of works.

Thanks tremendously Carol. Challenging myself these days to merge social significance with aesthetic appeal.

Such a magical and appealing piece, Aberjhani!! Love the warm and gentle depiction of the night. A truly original rendering! L/F

I appreciate that very much Angeles.

Thank you VIVA for that heartfelt response. The feeling is one I know much better than I’d like to and about which I’ve written in a couple of books. It was not my intention to revisit it but recent events convinced me it was necessary. So: for the children who are gone too soon and, as you stated, “we who also lose out on their stay among us…”

Beautiful , Aberjhani.........though the kaleidoscope of their lives is cosmic, it is we who also lose out on their stay among us, when they've gone too soon. That was what most saddened me when our son (baby) did not survive to fulfill his dreams, and ours.....very long ago,now....I love,love your art/this Series,especially.....it is like seeing their spirits soaring,glowing brightly....eternally. Kudos,f.v....VIVA