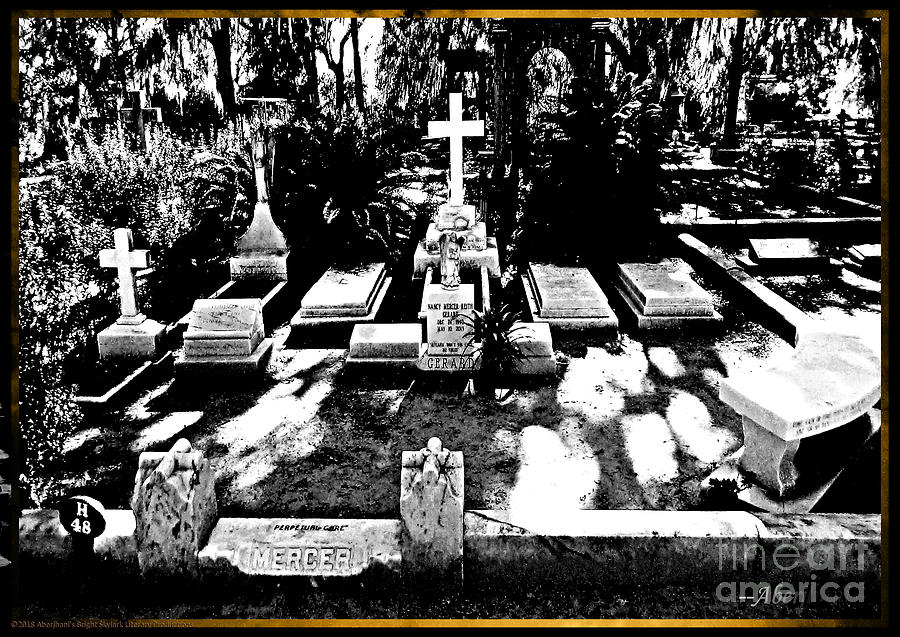 Composer and entrepreneur Johnny Mercer (John Herndon Mercer, 1909-1976) is often recognized as one the most famous sons of the city of Savannah, Georgia (USA) and one of the most influential figures in the history of American music. This black and white photograph is of his burial site alongside various family members in lot 48 of the Bonaventure Cemetery. The cemetery is located at the eastern edge of the city next to the Wilmington River.

Johnny Mercer wrote numerous popular songs for radio and film during the mid-1900s. He was nominated 18 times for Hollywood's Academy Award for best lyricist and won four times. Many of his compositions are considered American standards and have been recorded by such iconic vocalists as Aretha Franklin, Ella Fitzgerald, Bette Midler, and many others.

The crescent-shaped bench seen in the lower right-side quadrant of the photograph has etched on its sides such titles of Mercer's works as: "Ac-cent-tchu-ate the Positive," "Hooray for Hollywood," "Skylark," "Moon River," and "The Days of Wine and Roses." On the seat of the bench is a caricature of the lyricist with his signature below it. The cover atop his vault has the song title, "And the Angels Sing."

Mercer's music was featured heavily in the film "Midnight in the Garden of Good and Evil," directed by the great Clint Eastwood and based on the bestselling book by John Berendt. In addition to being a celebrated creative artist, Mercer was also an entrepreneur who co-founded Capitol Records.

Thank you Jeff and Aaron. I appreciate that very much.

Much gratitude to the Your Best Photography Group for featuring "Johnny Mercer's Grave in Bonaventure Cemetery."

Perfect processing for this photo. L

Thank you Carol, Jack, & Shoal for checking it out. Appreciate your thoughtful comments.

Enjoy the techniques used in this impressive display, joy to view;)