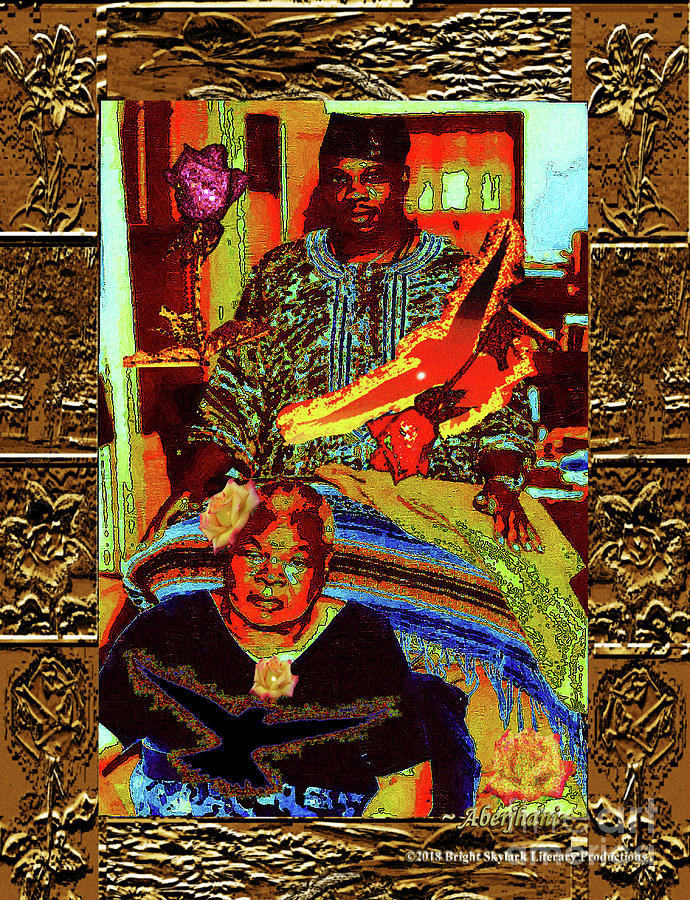 Flowers and Wings for Her Tears and Years

Flowers and Wings for Her Tears and Years

This print was almost titled Roses and Wings for Caring and Giving because of the subject which inspired it. Elderly matriarchs in most large southern families in America have traditionally been taken care of by younger female relatives when the time for such attentiveness came. The situation was different in the case of this family portrait. The matriarch seen seated in the lower left corner was looked after by an adult son, standing behind her.

More and more people around the world are coping with the issue of caring for the elderly as different countries' populations age. Depending on the culture, some see the challenge as a burden while others view it as a blessing or ennobling responsibility.

The flowers in this instance represent an accumulation of the woman's grace over the years and also the gifts of wisdom and patience that make caring for each other possible. On the woman's dress is a glowing winged figure carrying a yellow rose but the figure itself appears empty on the inside. This emptiness is symbolic of the loneliness from which many elders (and Millennials for that matter) tend to suffer on our planet even though we number in the billions with individual mega-cities containing populations of more than 15 million. Moving toward the woman to help alleviate the pain of loneliness is another winged figure bearing light and carrying a rose to fill the painful hollow void. The caregiver benefits as much from this exchange of beauty and intentional compassion as the one receiving care.

I wanted a frame for this print that would function as an extension of the artistic theme and of the portrait itself, so worked to construct one of gold-embossed flowers to do exactly that. Felt humbled by the surprising results.

Thank you Studio Tolere for checking it out. This work does hold a lot of meaning for me personally and many others with the issues it illustrates.

Really good, it makes me want to draw my mom.

Glad you appreciate it Almir.

Fantastic piece of art here. Your message and description are incredible as well. Tough issues being dealt with in different ways across the globe. Well done

Thank you very much Shoal.

I appreciate the insightful comments Carolyn. It's a very personal work so I guess a lot of what inspired it came through.

This artwork has such a deep and moving story of pain, strength and compassion. The symbolism is perfect. A very strong statement of the times we live in. F/L

Thank you very much Gallery Beguiled. It's nice to be remembered :)

Aberjhani -- The Soul Singer. (I remember you) l/f

Thank you very much Pharris Art. Appreciate the feature at Social Justice Awareness & Unity as Well.

That's good to know Geraldine. The description part comes natural to me because of the literary side of my life but I appreciate knowing the words are helping to enhance experience of the visual art.

I love reading your description so very interesting to read the history that accompany your amazing images !

Thank you Lori and Carol. This particular portrait means quite a lot to me so I'm glad others are finding significance in it as well.

This so colorful and alive

Congratulations on your feature in Digital Art