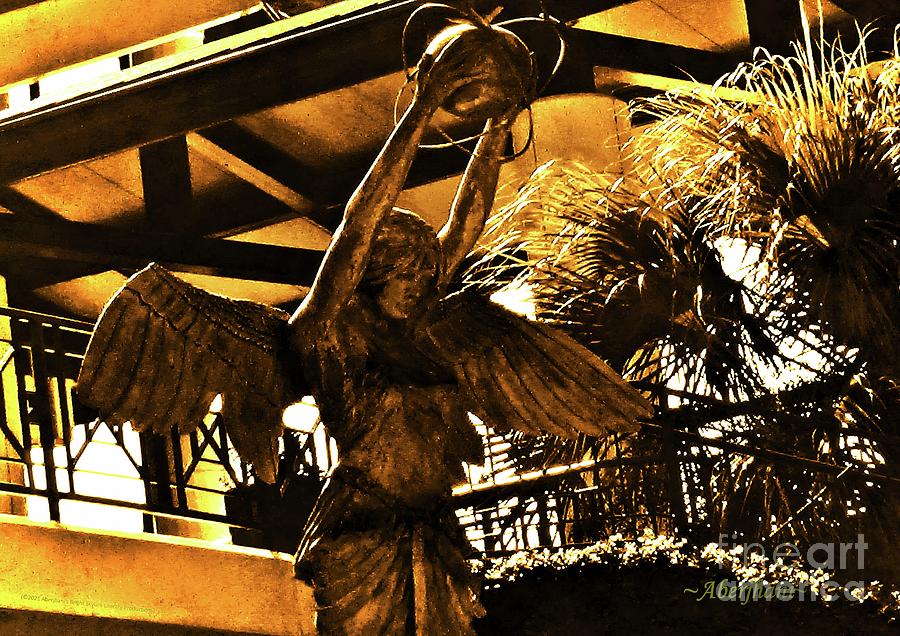 Angel with the Golden Disposition

Angel with the Golden Disposition

An interesting funny thing happened after I delivered 3 pieces of artwork to the Savannah/Hilton Head Airport Art Gallery for an exhibition curated by the Savannah Art Association in early October. I was crossing the busy terminal street where drivers dropped off and picked up travelers, then waiting for my own ride when I noticed something for the first time.

Further ahead, some yards away from the taxi stand waiting area, was a giant round planter filled with colorful flowers and, at its center, a gushing fountain with an angel on top. Above its head, the angel held a globe with miniature aircrafts circling it. I was approaching the fountain from the back so did not experience the full impact of its beauty until slowly circling around to the front of it. That I had been unaware of the fountain until that moment seemed impossible. But it was true, so I took as many photographs as I could before my transportation arrived.

As they do in cities like Rome, Paris, and Singapore, beautifully-designed fountains make up an important part of the appeal of Savannah (Georgia, USA). Different styles and sizes can be found in various squares and major public parks. The most famous is the Forsyth Park Fountain (images of which can be found in my FAA collection). The angel on top of this one caught my attention in particular because angels inspired an entire book of my poetry (The River of Winged Dreams) and several pieces of my visual art as well.

Not knowing the official name of the fountain, I gave it several: Airport Angel, Angel of the Airport, Flight Fountain, and Angel with the Blue Wings. Its basic color was distorted by shadows because it was not yet noon. I did not see a plaque describing the fountain, who sculpted it, or when it was placed there. So far, none of the basic information regarding it has been made available to me, but I’m happy to commend the unknown sculptor for flight angel fountain’s creation and the Savannah/Hilton Head International Airport for installing it.
What viewers see here is a mixed media rendering of the fountain using digital photography and digital painting. The goal was to combine a sense of classical style with modern aesthetics to evoke an atmosphere of inspired spiritual surrealism. In real physical life, the actual fountain framed by the architecture of the architecture of the airport itself stands as a modern classic creation in its own right. It may also be considered as symbolic of the airport’s growth and development over the past few decades.

Very nice Aberjhani! I too am amazed at the different art displayed at our airports, very cool creation! F/V/Tweet!

Thank you Laurie for checking out "Angel with the Golden Disposition." Very glad you like it.

Beautiful ethereal work, Aberjhani! Love the colors, composition and your wonderful story behind this delightful creation!

My heartfelt Gratitude to the YOUR VERY BEST PHOTOGRAPHY Group for featuring "Angel with the Golden Disposition." Thank you very much.

Thank you very much Lynn. Appreciate the visit & the comment.

So beautiful and a favorite!

Thank you so much Tejsweena for your visit and your beautiful response to "Angel with the Golden Disposition." One day I hope to learn the name of the sculptor who created the work that inspired this one so I can properly acknowledge him or her.

How an atom is responsible for collectively in make of any path like one for jets to land precisely safe than of risk after flight, like of Mother created her children with love of her life selflessly without taking any credit as per known to be unknown from gender and became safeguard for soldiers of whole globe like of her children than being discriminated in any factor like of distributing equal food to all without a second of doubt at heart for the well-being of everyone! Such a very marvelous in vision this beyond beautiful and a very heavenly creation of yours is taking me, and this creation is making me hear the carols of peace! A very gorgeous creation it is my dear friend! :)

Thank you very much Carol. I'm a little bit mesmerized by this Mystery Angel so have been experimenting with different visual and literary interpretations of it.

This is such a lovely piece Aberjhani, wonderful work as always!

Thank you very much for that Scott. Glad you enjoyed checking out "Angel with the Golden Disposition."

Thank you Maya for checking out "Angel with the Golden Disposition." I'm enjoying exploring the beautiful works in your collections as well.

Such a powerful and inspiring photo, Aberjhani!! The framing and the color scheme emphasizes beautifully the figure of the angel!! L/F

Thank you very much Angeles. Getting the emphasis on the angel just right took some work so I appreciate your feedback on it.

Thank you Marcia. The gold & bronze in this piece refused to be denied.